This week we speak with Delroy (DJ Earns a 50K account); one of our newly minted funded traders who have just earned a funded account! He shares not only his trading journey; but principles on risk management, psychology, and a look into his strategy. 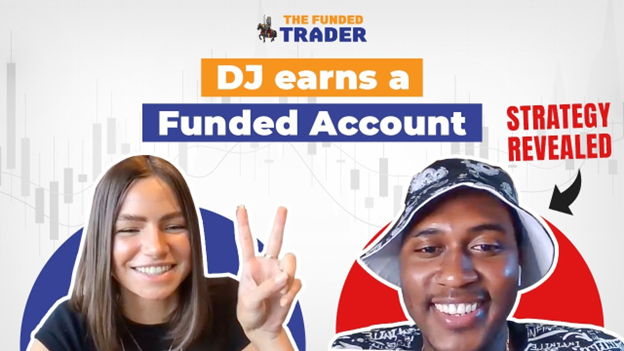 Hello Funded Kingdom and welcome to this week’s look at one of our newest funded traders, Delroy or DJBlaxx as he’s called on stage.

After growing up in the Caribbean and then pursuing a career as a DJ, the COVID-19 pandemic hit and largely put an end to music festivals and the stability of being a DJ, so Delroy took a chance. Now residing in Canada, Delroy is a trader and exclaims his excitement about this career switch.

As the interview kicks off, Tori asks Delroy how he got into FOREX at all to which Delroy explains that he’s only a year into his FOREX experience and after the field of music and becoming a DJ was hindered he began looking for career paths that would allow him to be his own boss and make a sustainable income.

As he continues to explain his beginnings, he shares that a friend of his, Leroy, was the one to give him his first exposure when he pulled out his phone and showed Delroy the MetaTrader 4 application. “I couldn’t understand one thing that was on that” Delroy says as he laughs, but he didn’t let that discourage him and pressed forward learning, expanding, and researching new ways to perfect his newfound craft.

Asking if Leroy, Delroy’s friend that introduced him to FOREX, helped teach him and guide him towards success, Delroy replies saying he was too excited about this new endeavor and went off on his own doing some tutorials and learning through YouTube. As he speaks and remembers what it was like as a day-old trader, he shares his old “strategy” which was simply looking at the charts and basing his entries on his feelings.

Although this is not a sustainable strategy, as he now knows, he did have some success with it. “There was one week when I turned a $50 account into $1,000,” says Delroy, he would look at the current trend and if it was rising he would buy and vice versa, however, when the first candle would appear in profit he would close out his trade and take in a $10 profit, $20 profit and other smaller incremental gains. As he thinks back to that point in his early trading career, he knows that it was luck that drove this strategy to success.

After facing these minor successes with his trading, Delroy began to study, once again finding his way to YouTube, watching tutorials and educational videos to help perfect his strategy. Tori asks How did you find The Funded Trader, to which Delroy replies “through YouTube”. One of the pages he follows had done a video on the top 5 PropFirms, and they announced they will be starting with The Funded Trader soon, which was enough of an opening for Delroy to begin looking into us.

As he began researching and planning his switch, he remembered some issues that came about from other firms, such as support and the untimely nature of the community.

Through experience and the newly introduced Rapid challenge Delroy (DJ Earns a 50k account) decided to engage in The funded trader community, he signed up for the $50K account, and within two weeks passed phase one, and the following two weeks passed phase two. Delroy had become a funded trader with The Funded Trader in less than a month and earned his first payout the following month.

Take It Slow when Trading

As Tori asks Delroy what his advice for non-funded traders would be he says “you need to take it slow”. He says that he rushed his trading experience when he first began and would look to pass his phases in one night by using really high leverages.

He elaborates on maintaining a steady pace by saying you do not have to trade every day and even shares the fact that he doesn’t trade on Mondays or Fridays.

Delroy explains how his experience thus far is predominantly tied to FOREX, however, he has minor exposure to GOLD and even took a trade this morning (Day of the interview).

Continuing on he explains how he trades the London market and how he wakes up at around 3 a.m. (EST) to trade, then gets about an hour of sleep and heads to work. Delroy looks forward to his transition into full-time trading, which he suspects will be really soon.

When asked about his personal experience regarding The Funded Trader community, Delroy (DJ Earns a 50k Account) states that he has been involved and shares how the staff here really focuses on making you “feel at home”.

He then goes on to say how his favorite part of The Funded Trader is the Rapid challenge and how it really helped him with the psychology behind his trading.

This conversation turns to advice; he explains what he wishes he had done differently, although Delroy believes that having a demo account wouldn’t have been the best for him, he knows how beneficial it is for others and advises the up-and-coming traders to open demo accounts prior to going live.

Delroy then begins to explain how he is somewhere between a scalper and a day trader, mainly because he is looking to make 1% every trading day. Delroy then shares his screen and begins to do a recap of a prior trade that he had taken, he rewinds the charts and takes us through a step-by-step analysis of his personal strategy.

Further explaining his strategy, Delroy tells us how the instruments he focuses on are GOLD, EUR/USD, GBP/USD, AUD/USD, GBP/JPY, as well as a few others.

He then goes on to demonstrate how he has incorporated his training from “Inner Circle Trader” on YouTube and his own personal touches in order to create a strategy best suited for him.

Tori then moves on to ask Delroy (DJ Earns a 50k Account) what his advice would be for those who haven’t gotten into trading yet, as well as for those who have already begun but maybe could use a little help along the way.

Delroy then enthusiastically speaks to the importance of your knowledge base; we must gain as much knowledge as possible while being careful when choosing our sources.

He then goes on to say how he has only been in the space for a year and how he does not have the necessary experience to become a mentor, and that up-and-coming traders should be mindful of this when beginning their journey and connecting with others to learn from.

As for the traders who have some exposure to space and are still advancing their careers, Delroy suggests taking a break after winning.

This advice also resonates with me because when we start winning trades and making profits, we often tend to become overzealous and might start placing trades at inopportune entry points or even become less aware of the signals and movements of the market.

CLICK HERE FOR A RAPID, STANDARD, or ROYAL CHALLENGE