22000 Profit From Trading! This week we speak with Mark; one of our newly minted funded traders who have just earned a $22K payout! He shares not only his trading journey; but principles on risk management, psychology, and a look into his strategy. 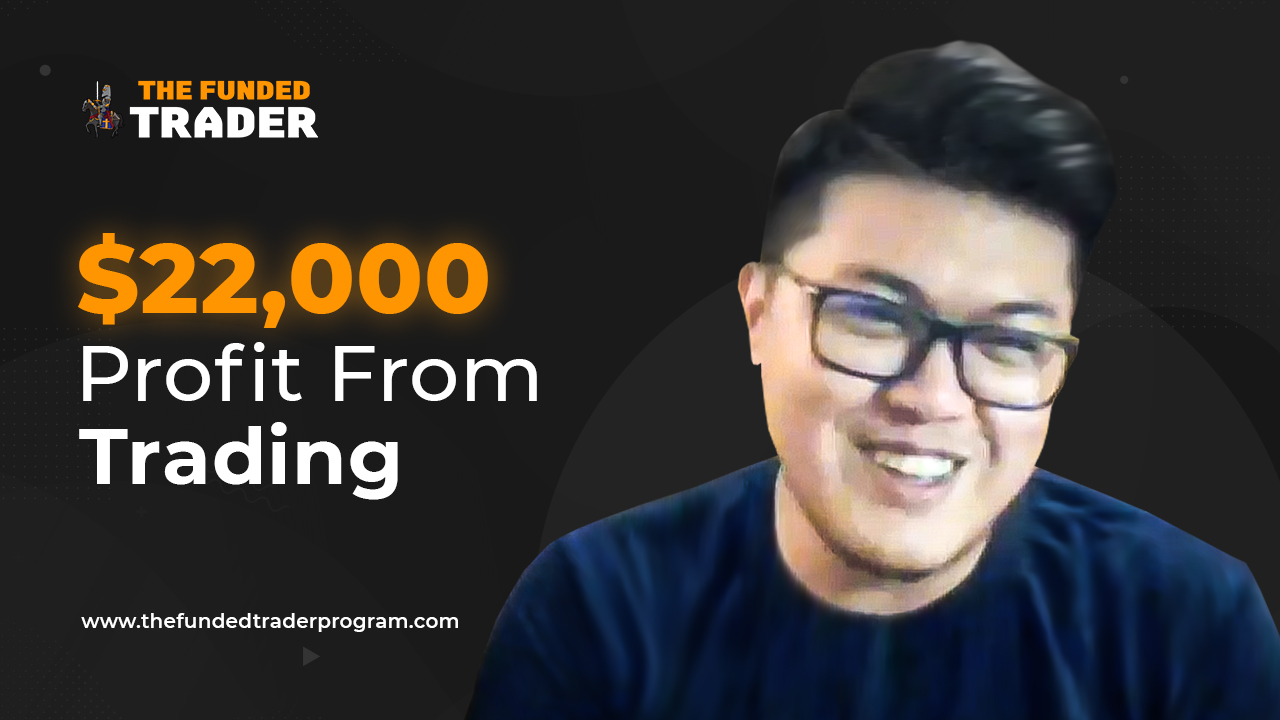 “If you stay persistent, the market will reward you!” – Mark Mangulabnan

Forex Brokerage in the Phillippines

As Tori and Mark kick off the interview, Mark explains that he used to work for a FOREX brokerage in the Philippines and has since found his way into the career path of a full-time trader.

“I am from Manila Philippines” Mark explains, as he tells the listeners that he is also an aircraft mechanic by trade.

Mark once had aspirations of becoming a pilot, however when he stumbled into trading he fell in love, he now wanted to chase a career in the financial markets!

How long ago did you get into trading?

“During my second year of college I got into trading, so it was 2015, it’s been about 7 years now” Mark explains. Tori and Mark have a moment of commonality as they both have had 7 years of experience within the FOREX market to date.

As the conversation continues, Mark tells us how before trading he used to raise capital for business, “I used to speak to a lot of investors as to why they should invest in designated businesses.”

Mark got very tired of doing this and began his search for how he could generate monthly cash flow simply from the use of his phone and computer. “I stumbled upon trading, which immediately appealed to me because it gives you freedom and control over your own time!”

Mark continues to explain how the only challenge he found with this new FOREX endeavor was the fact that when he began all those years ago the information wasn’t as accessible as it is today, in order to find the appropriate material you had to work a lot harder, longer, and explore many more resources.

One thing that Mark did t learn more about the FOREX community and trading itself was applying to a brokerage firm, where he expected to learn a lot in the field of trading.

Mark explains how working for the broker for over 2 years gave him insight and certainly a different perspective on trading and has helped him grow into the trader that he is today.

How did you build your own strategy?

“I’m quite a nerd when it comes to strategies,” Mark says as he continues to explain his breakdown of the knowledge he gained while working for the broker.

Having worked there and being able to see what the market was doing and how people were reacting to it Mark was able to gain some insight into the psychology of traders. He was able to identify patterns and predict their outcomes with a certain degree of accuracy moving forward.

Mark tells us that he actually waits for certain patterns to fail before he gets into a position. This way he knows where the market is headed.

Furthering his explanation of how he’s built his strategy, Mark tells us that throughout the years he has come up with some very complex strategies however as time goes on, and he continues to grow his strategies become simplistic and much easier to follow.

Have you tried anything other than FOREX?

“Yes, I’ve tried, but other charts aren’t as neat and clean, so I stick with FOREX”.

Mark explains that with FOREX he has a much easier time identifying certain market movers while in other charts the effecting factors are very unpredictable.

“There are a lot of gaps on other charts”.

What kind of trader are you?

Mark actually uses many different types of strategies which allows him to fit within a few different categories, however, he considers himself to be a day trader for the majority of his trading.

He explains to us that he finds himself in between swing trading and day trading fairly often. Mark never really finds himself scalping due to the cost associated with high position sizes.

How did you find The Funded Trader?

Mark found The Funded Trader while he was purchasing a challenge with FTMO, “I was looking for the best offer right now in the market, especially with the drawdown limits.”

Also, Mark tells us how competitive The Funded Trader is compared to other prop firms such as FTMO.  Mark says, “I get this feeling that it’s run by traders as well; it gives me that sense of warmth”.

Other firms feel like investors who are out to make money off of members, while The Funded Trader feels much more trader-friendly and trader centric.

Are you involved with The Funded Trader community?

We have put a lot of effort into helping our community grow and become what it is today. This shows as Mark speaks about how active, helpful, and engaging the community has been in his own experiences.

“I used to join a lot of other communities and the problem with all of these was they were just trying to show off their profits, and strategy and all, but with TFT it’s more like talking about principles and aspects of trading.”

Everyone within the community here at The Funded Trader is focused on improving their strategy and growing in their trading journey. Mark finishes off his response by saying, “It all boils down to authenticity, and that is the vibe that I am getting from this community.”

Mark had purchased the $400k account and then after a month bought another $200k account, although he would end up merging these accounts to create a $600k, Mark would be afforded the opportunity to receive payouts on the $400k account first.

Aside from his trading with The Funded Trader,  Mark manages a client’s investor account.

Starting off his strategy breakdown, Mark informs us that he never really uses Trading View and that he is a hardcore Mt4 guy! Mark also tells us that he almost exclusively trades ERU / USD and GBP / JPY pairs.

“Many people trade many pairs, however, these pairs are correlated so they aren’t really gaining opportunity, they are just increasing their exposure and risk.”

Mark provides us with an example, saying, “if you risk 1% on this pair and another 3% on a highly correlated pair, you’re essentially risking 4%.”

When Mark pulls up his charts and begins his analysis he looks for the range on the day. He then shows us by calculating pip movements from previous days.

As he measures the ranges he looks for patterns such as decreasing range over time which allows him to mark off his high range line. Also, the low ranger line at which time he waits for a breakout associated with these two lines is something else he measures.

Along with every great strategy, comes proper risk management. The way that Mark calculates his stop loss is very simple, “I take the range, multiply it by 2 then divide that by 5, and that gives me my stop loss.”

Mark then goes on to explain how he doesn’t have any pre-set take profit levels and rather waits for his analysis to tell him when the market is going to switch out of his favor, then he will manually get out.

The way that Mark does this is by using the 250 Simple Moving Average and once the price drops below (If long) the moving average then he will exit the trade. Mark did say that once the price moves to a certain point, he will begin utilizing a trailing TP.

While explaining the effectiveness of his system, Mark warns traders not to overdo it with their lot sizes. Remember, small gains are better than big losses!

Is trading popular in the Philippines?

Trading is starting to grow in the Philippians. While a lot of people are facing trying times, people are still trading. The economy took a hit, businesses closed, and people lost their jobs. So people began looking for alternative sources of income and many of them started turning to trading.

What’s your advice for both new and experienced traders?

It all comes down to your point of view on trading, coming into trading with the mindset of “making millions in a few months” will give you unrealistic expectations.

Look up to “The real OG’s such as Jim Simons and Warren Buffett” these guys are legends and when they measure drawdowns it’s measured in years. “We should think in the long term, never overestimate ourselves”.

Mark tells the listeners to be patient and allow their strategies to build a basis on which they can judge it.

When you’re testing your strategy, and you lose a few, don’t assume that the strategy is worthless. Instead, give it time to establish a baseline and create data that you can properly judge.

Mark does go on to explain that giving your strategy time to mature is important even when it starts off winning. Also, just because it wins, in the beginning, doesn’t mean it always will! “I will take 50 to 100 trades before I decide if the system works or not” -Mark.

CLICK HERE TO TRY A STANDARD, ROYAL, OR RAPID CHALLENGE

Hypothetical or simulated performance results have certain limitations. Unlike an actual performance record, simulated results do not represent actual trading. Also, because the trades have not actually been executed, the results may have under-or-over compensated for the impact, if any, of certain market factors, such as lack of liquidity. Simulated trading programs, in general, are also subject to the fact that they are designed with the benefit of hindsight. No representation is being made that any account will or is likely to achieve profit or losses similar to those shown. CFTC Rule 4.41